The first five of the USSR national ice hockey team and the CSKA club of the 1980s. It included Vladimir Krutov, Igor Larionov, Sergey Makarov – forwards, and Vyacheslav Fetisov and Alexey Kasatonov – defenders

Legendary hockey five of the USSR!

The first five of the USSR national ice hockey team and the CSKA club of the 1980s. It included Vladimir Krutov, Igor Larionov, Sergey Makarov – forwards, and Vyacheslav Fetisov and Alexey Kasatonov – defenders

In the west, Larionov’s five received the nicknames “The Green Line” (due to the fact that they played in green sweaters in training) and “KLM” (English KLM line) after the first letters of the attackers’ surname. 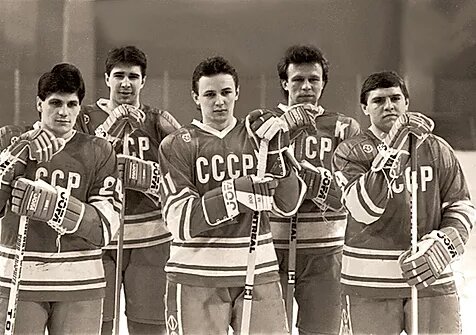 The Larionov five, in their traditional composition, began performing at the 1981 Canada Cup, when they were all 21 – 23 years old. In this tournament, they scored 22 points (11 + 11) in 7 games and became the key five of the national team. This year, the team won the Canada Cup, beating Canada in the final with a score of 8: 1.

At the 1984 Canadian Cup, the five again played a leading role in the national team, gaining 18 points (10 + 8) in 6 games, but the USSR was defeated by Canada in the semifinals in overtime 2: 3.

Alexey Kasatonov said about this link: “We had one rule – if someone from the opposing team touched one of us, he became the enemy of all five.”

In the late 1980s, Viktor Tikhonov began to prepare a change for the three Makarov – Larionov – Krutov, a new link – Mogilny – Fedorov – Bure, which, however, did not last long due to the departure of all three hockey players to the NHL.

Larionov was born in Voskresensk and has been playing hockey since childhood. at the age of 17 he made his debut in the USSR championship as a member of the Vokresensk “Chemist”. After 3 seasons in “Chemist” Larionov was transferred to CSKA, which under the leadership of Viktor Tikhonov from the late 1970s was the undisputed champion of the country and the base club of the national team. In CSKA, Larionov constantly played with Sergey Makarov and Vldaimir Krutov. Together with the defenders Vyacheslav Fetisov and Alexei Kasatonov, they formed the Larionov five, which in the 1980s was the main CSKA and the USSR national team. In total, Larionov played 457 matches in the USSR championships and scored 204 goals.

Igor Larionov is one of several hockey players in the world who managed to win the main titles of world hockey: the Olympics, the World Championship among adults and juniors, the Canada Cup, the World Cup, the Stanley Cup.

I started skating when I was 4 years old. The first coach, Vladilen Nikolaevich Golubaev, started playing at the Meteor stadium. Then he studied at the CSKA school with coach Valery Pavlovich Stelmakh. The idol of childhood was Valery Kharlamov. Moreover, Krutov was personally acquainted with Kharlamov and was even friends with him.

Born June 19, 1958 in Chelyabinsk. The family had two older brothers who were also fond of hockey. Sergei started skating at the age of five. Pupil of the Chelyabinsk hockey school

The first coach of Sergei Mikhailovich Makarov was Viktor Ivanovich Starikov. According to the hockey player, the coach was like his own father, who worked with him and with other students from morning to evening. In addition to coaching, he was an educator and guided children when his students did something wrong

In his interviews, the athlete mentioned that it was difficult for him to name his best coach, but it was comfortable to work with the first coach, Viktor Starikov, who taught him a lot. Coach Starikov did not interfere in the disputes of his pupils

Vyacheslav Alexandrovich Fetisov was born on April 20, 1958 in Moscow, in the new Degunino district, which had just become part of the capital.

He started playing hockey in the yard team of the house number 4 on Korovinskoe highway. As part of the yard team of ZhEK # 19 on Korovinskoe highway, he made his way to the finals of the city tournament “Golden Puck”. At the age of 12, he joined CSKA to the coach Yuri Alexandrovich Chabarin. At the age of 18, he participated in a hockey tournament as part of the CSKA youth team

In 1973-1989 – in CSKA, he rose to the rank of major (he was the captain of the team and the USSR national team, with a short break in 1988), in 1994 – in “Spartak” (M). In the 1980s, he played in the legendary Larionov five of the USSR national team and the CSKA club along with Sergei Makarov, Igor Larionov, Vladimir Krutov and Alexei Kasatonov as a defender. In the championships of the USSR and Russia: 480 matches, 153 goals. Graduated from the Leningrad Military Institute of Physical Culture

In his interviews, the athlete mentioned that it was difficult for him to name his best coach, but it was comfortable to work with the first coach, Viktor Starikov, who taught him a lot. Coach Starikov did not interfere in the disputes of his pupils

Grew up on Novoizmailovsky Prospekt in Leningrad. Great-nephew of Admiral Vladimir Kasatonov. He grew up as a sports child, his parents in the first grade enrolled him in the swimming section in the pool on Nevsky Prospekt. For three years he was engaged in swimming, but the pool was closed and the section was transferred to another area of ​​the city. Alexey was not very upset – he himself thought to leave, because he believed that he lacked competition in swimming.

I found this competitiveness in team sports, and most of all in hockey. As a result, Alexey decided to go to the school of the regional team of the Meat Processing Plant, which recruited young athletes at the SKA indoor skating rink. However, Kasatonov mistakenly came not to the rink, but to the SKA track and field stadium. Already there I read about the recruitment to the SKA hockey school, which became his first team.

Nevertheless, the young hockey player had a problem – poor skating (in court games he played without skates). Coach Oleg Konstantinovich Sivkov worked with Alexei a lot, because he saw in him the ability to understand the game and think outside the box at the rink. As a result, this flaw was successfully corrected.

Reaching the top five of Larionov in its classic line-up

Multiple champions of the USSR

Reaching the top five of Larionov in its classic line-up